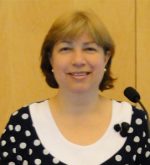 Since 2009, Ruxandra Crutescu holds a Ph.D. in Architecture from “Ion Mincu” University of
Architecture, Bucharest. Between 2008-2013, she led the Research- Development-Innovation Department at
Passivhaus eco-architect, Bragadiru, whose founder she is. Her contribution to the scientific activity consists of more than 80 articles, published in scientific magazines or by the occasion of national /international scientific
conferences and several books.

The main subjects were the ecological architecture, sustainable development in architectural matters, the use of renewable energies in buildings and urban sites, in order to reduce the greenhouse gas emissions and protect nature. Her activity is oriented towards the design and construction of energetically efficient buildings, ecological and non-polluting, respecting the passive, zero energy and plus energy building- standards. Member of Romanian Order of Architects, the Romanian Register of Urbanists and The Romanian Union of Architects, she is involved in the research activity of energy efficient buildings since 1997. Active participant at the life of the Romanian and the international the scientific community, she is since 2012, member of the Council of the World Renewable Energy Congress and WRE Network (based in Brighton – Great Britain) and co-chair of the World Renewable Energy Congress Bucharest in 2015.

She is also a member of steering committees of international congresses WSEAS and WREC. Amongst her design activity’s important results, as project manager, there is the first Romanian passive house, built in 2004, at Burlusi (Arges County), certified by the Passivhaus Institute Dr. W. Feisst, Darmstadt, Germany and the first Romanian passive office-building (2500sqm), built in 2007, in Bragadiru city (Ilfov County), which belongs now to the Romanian Arcon -Amvic company. Dr. Arch. Ruxandra Crutescu has a continuous and sustained activity, with an experience of more than 33 years in the architectural design and research in the field of buildings and ecological architecture. She is also an authorized energy auditor for buildings, authorized in EU thermographer for buildings, authorized designer for passive buildings, having planned and risen (together with her design team) more than 3.500 buildings (family houses, kindergartens, schools, city halls, office buildings, etc). All the buildings that she designed are based on nearly zero energy / bioclimatic concepts of the actual architecture.

One of the main achievements of her activity is implementing in Romania of a new building system for ecological and energetically efficient buildings: Marc Insulated Concrete Forms, made of Neopor, that are produced at Bragadiru city, Ilfov County, Romania. She organizes annual symposiums and seminars like “Energy Days”, “Green Spot”, „ECOARCHITECT” and “Active Green Architects” on similar topics. In 2015 she was between the organizers and co-chair of the World Renewable Energy Congress in Bucharest Romania. In 2016, she was one of the 5 organizers of the „Diversity in Sustainability” Symposium in Bucharest, Romania. In may 2013 she received the SUERD award – Social & Economic Innovator.